Early hand methods used in cigarette production were slow and tedious; an expert could roll only about four per minute.  W. Duke Sons and Company and other firms began to hire immigrants from eastern Europe who were skilled in cigarette making.  As cigarettes grew in popularity, tobacco companies began the search for a mechanical method of manufacturing them rapidly.  Around 1877, the Allen and Ginter Company of Richmond, Virginia, offered $75,000 to any person who could invent a practical cigarette-making machine.  Such a machine was developed in 1880 by eighteen year old James Bonsack; Allen and Ginter installed the machine in their factory, but discarded it as a failure after several trials. 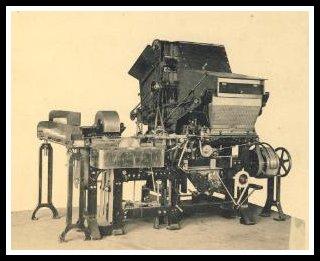 In 1884, however, the Duke company decided to take a chance on the imperfect Bonsack machine, leasing and installing two of the devices in the Durham factory.  When working properly, the machine could perform the work of forty-eight hand rollers.  When the Dukes encountered mechanical problems with the machine, The Bonsack Machine Company of Virginia sent a mechanic, William T. O'Brien, to Durham to refine the apparatus.  O'Brien and James B. Duke were finally able to make the equipment work more smoothly, cutting the cost of cigarette manufacturing in half.

Believing that the new Bonsack machine eventually would eliminate hand processing of cigarettes, James B. Duke, in the spring of 1884, went to New York to establish a branch of the company there.  This relieved the overburdened Durham factory and enabled the firm to gain a foothold in the national center of commerce and world trade.

W. Duke, Sons and Company was becoming the leading cigarette producer in the country.  Increased advertising efforts enabled the firm to outsell its competitors.  One journalist later noted that James B. Duke "was always an aggressive advertiser, devising new and startling methods which dismayed his competitors and was always willing to spend in advertising a proportion of his profits which seemed appalling to more conservative manufacturers.